The use of treated pigments in cosmetics

The use of treated pigments in cosmetics

Miyoshi was the first company to create and offer silicone treated pigments. This technological innovation has revolutionized the art of formulation. What is a treated pigment?

The history of surface treatment in the cosmetic industry begins with the Japanese chemist and entrepreneur, Mr Ryota Miyoshi. He began his career at the age of 16, working in the research and development for pearl pigments in the cosmetics industry. He was quickly confronted with the difficulties of formulating pigments and powders. At that time, pigments had no other function than to color cosmetic products. It was difficult to improve the adhesion of products to the skin, the texture or the stability of a formula. Mr. Miyoshi saw this as a huge challenge for the cosmetics industry. With his knowledge of pearl pigment coatings, he was inspired to develop a technology to modify the surface of pigments and powders to facilitate their application and increase their performance. Despite his enthusiasm to tackle this problem, many cosmetic companies rejected his idea.

Despite their negative comments, Mr Miyoshi persevered. After several developments with various surface agents, he created the first silicone-based hydrophobic surface treatment for cosmetics (later known in the market as the “SI” surface treatment). Mr Miyoshi hoped that the world would one day recognize the benefits of surface treatments and that everyone would be able to enjoy better quality makeup. This did indeed happen, and since then, the use of treated pigments has become a key fixture in the formulation of most cosmetic products.

Miyoshi Kasei Limited was founded in 1979 by Ryota Miyoshi, and to this day, Miyoshi Kaseiremains a family business. Since its inception, the company has grown into the Miyoshi Group, with subsidiaries in the United States (Miyoshi America, Inc. established in 1984 in Connecticut, first as USCC), France (Miyoshi Europe SAS established in 2003 in Lyon) and China (Miyoshi Suzhou, CO., Ltd. established in 2011 in Suzhou).

What is a treated pigment ?

Pigments are solid particles (usually powders), which give color and shine to a cosmetic preparation, whether it is liquid or solid in texture. They are non-soluble and remain dispersed in the product.

Surface treatment technology consists of modifying the physicochemical properties of mineral pigments by bonding or coating a chemical substance in order to give them new properties.

Why use a surface treatment in cosmetic formulations?

Surface treatments generate essential properties for the formulation of cosmetic products. Functional ingredients and dispersions contribute to facilitate the work of formulators and improve the performance of  make-up products.
The main benefits of processed pigments in cosmetic formulations are as follows :

Miyoshi group is constantly innovating by offering new surface treatments to meet the needs of the industry, and by adapting to the new trends and requirements of its customers and ultimately of consumers.
To further enhance the service provided to its customers, Miyoshi Europe offers a collaborative development service to meet specific needs.

How to choose the right surface treatment? For which benefits in formulation?

The choice of adapted treated pigments is based on a preliminary definition of the final performances of the formula and obviously of its galenic. The treated pigments are preferably incorporated into the external phase when it is an emulsion. Thus when working in direct emulsion, the choice will be for hydrophilic pigments and conversely for indirect emulsion the choice will be for hydrophobic pigments.

Our advice for a successful formula :

In recent years, the percentage of ingredients of natural origin, as well as certifications by independent organizations such as ECOCERT with its COSMOS certification, are predominant criteria for the choice of treated pigments that will be used in cosmetic formulas. Miyoshi group offers a wide range of COSMOS approved treated pigments to combine performance and naturalness.

For the basis formula below, we can compare the benefits of treating the pigments and fillers with different kind of surface treatments (the treatments are described in the recap table at the end): 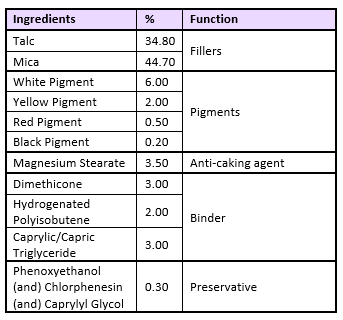 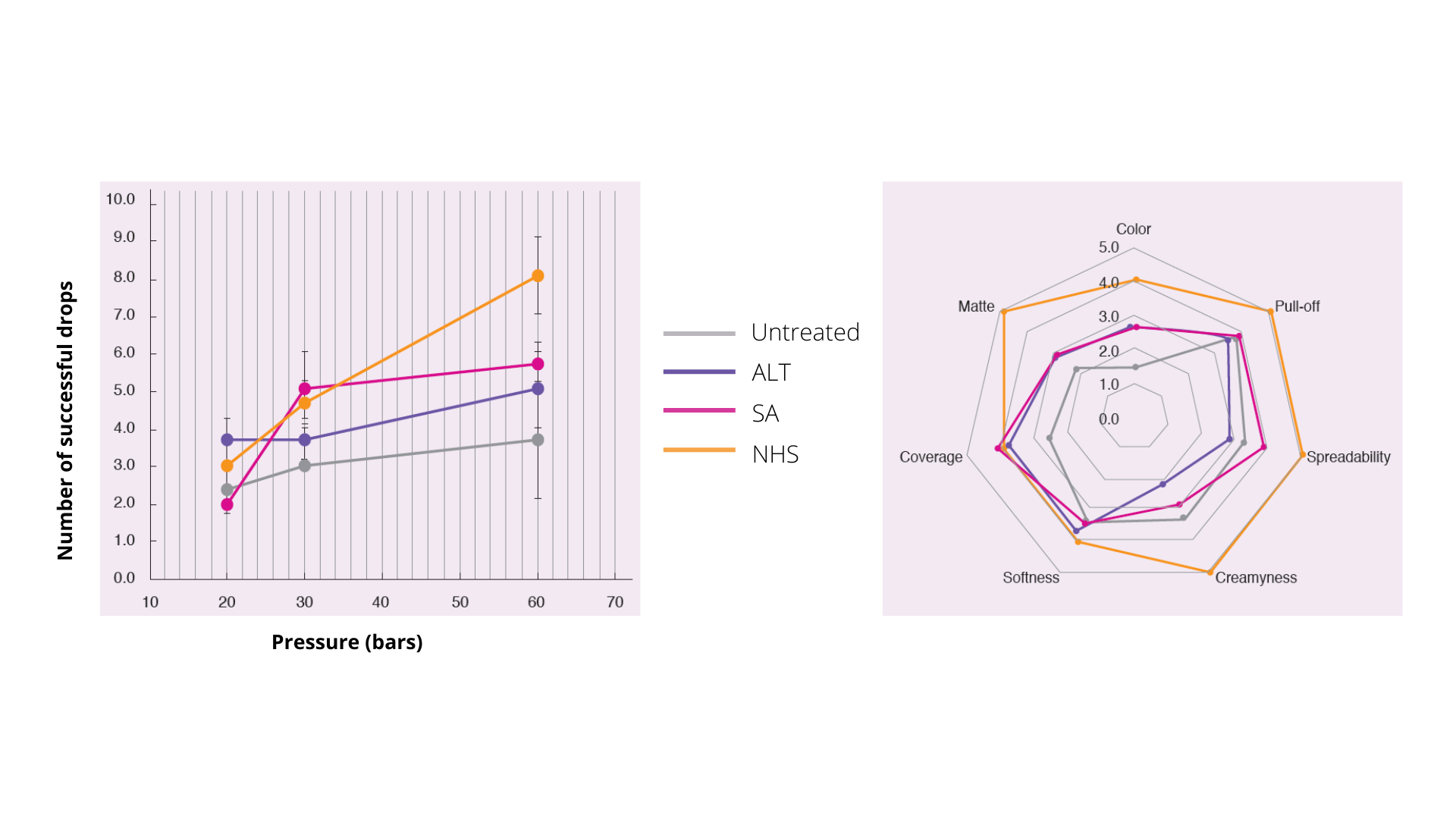 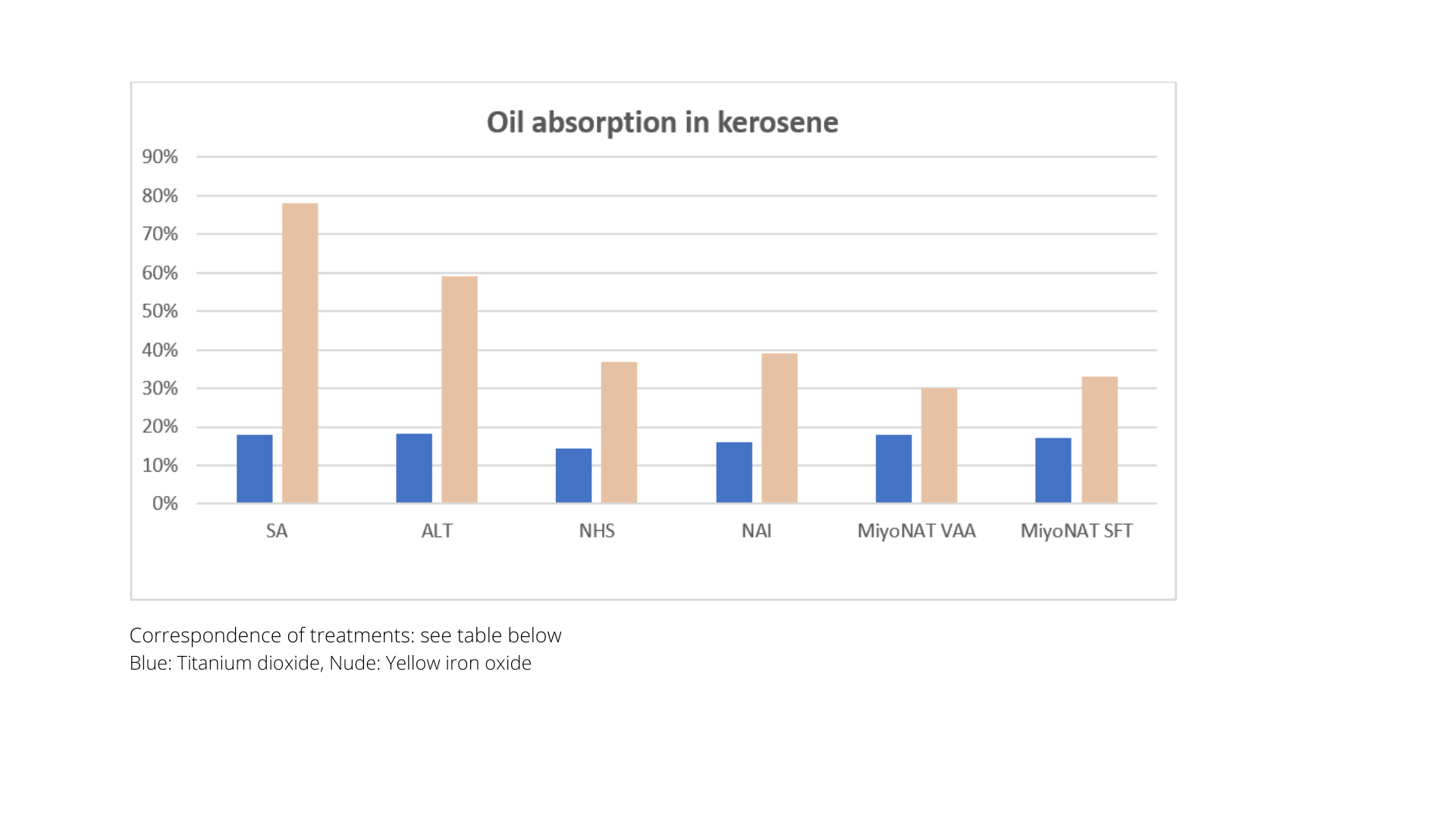 Request a personalized study or an appointment with your sales contact